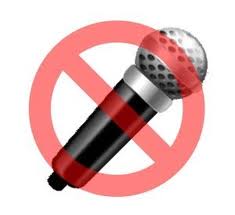 At the Pinole City Council Meeting, Tuesday, October 15, 2013, resident Julie Maier was in the midst of her speech regarding the cell tower, when Mayor Long turned off her mic and asked that she be removed from the Council Chambers. Mayor Long said to Julie, “Put it in writing and have it posted somewhere.
Here it is.

Julie sent me this email:

“I am attaching my written speech from the other night that was cut off. The portions in italics I did not read at the meeting since I knew I only had 2 minutes, but as you saw I still went over. It is the last portion with bulleted points when my mic was turned off and Debbie continued to interrupt me. I am especially proud of my final comment about earning our respect and admiration but I have no idea if they heard that at all. You can use all or portions of it, whichever you like.”

“Still two days later what is most upsetting to me is that I spent almost two hours writing and careful preparing what I wanted to say, in large part due to the alarm the copy of the staff report caused among our group and the Ellerhorst community, and I was only afforded 2 minutes to present my views. If staff had included just a single slide at the beginning of the handout of their presentation that clearly stated that these are options Verizon suggested in a brainstorming session and the staff has not agreed to any of them or is not recommending any of them tonight, then all of these people would not have spent 5 days sick with worry and outraged that staff did not appear to be listening to council’s direction. I still had a lot to say about the entire process of this lease and also wanted to share what I am looking for in terms of values and leadership skills of my city council. I found it impossible to condense that into a three minute or two minute speech. While I can understand the need for time limitations when speaking at council meetings, I also think they are arbitrarily applied since many speakers that evening were not stopped at 3 or 2 minutes and because I have also spoken longer than 3 minutes in the past. I do wonder if I was stopped because the mayor and some council members did not want to hear the challenge I was placing in front of them. I will need to continue to work on my editing skills and also consider other venues to get my views, concerns and questions across to the council. I was very appreciative of Phil Green’s support of my right to heard and finish my speech.”

Thank you forgiving me the opportunity to speak to you tonight.

Cell Tower lease site and Station 74, although connected by the fact that both are in the boundaries of Pinole Valley Park, are separate issues. That was very clear in the comments made by the council and many speakers at the Oct. 1st meeting. Staff was told at that meeting to proceed on their fact-finding mission and bring back information on Station 74 conversion and the cell tower lease as separate issues. Most of the council members also stated at that meeting that the cell tower was obviously not going to be built, but that we had to deal with issue of Station74 and that Verizon had to be informed of these new restrictions from the State and National Parks.

A very big concern for the council has been fiscal ramifications of Verizon’s lease being rescinded and conversion of the Station 74 site. You said you had to consider the effect on current and future state and federal grants—this was especially a concern for Councilmember Baneulos and Councilmember Swearingen wanted “whatever deal was best for taxpayers”. Losing grants would certainly not be good for the taxpayers. Having to repay for Verizon for costs they have already incurred in addition to some restitution for rescinding lease is also not ideal. However, I don’t see how the city is going to avoid losing some money on this bungled lease development that should have been fully researched and vetted before any memorandum of lease or permits were signed. The city staff and the committees and council members who approved their actions without doing their homework are responsible for this financial mess.

Since the state parks grants have clearly delegated that no commercial use is allowable in park, therefore I do not believe eminent domain is an option for Verizon. Although this commercial phone company claims to be a public utility they have no right to this property without exigent need which they have never proven.

Due to those state park grant restrictions, the City manager and City attorney were not legally competent to agree to a lease without being fully informed, so lease is voidable as Mr. Meehan so clearly explained at the Oct. 1st meeting.

Yet now, two weeks later staff returns with the most ridiculous idea yet, building a cell tower at the gateway to the valley…across the street from our local elementary school. You cannot kill two birds with one stone in this case. Remember they are separate issues. I unfortunately no longer trust that staff has the best interests of the Pinole residents at all.

Here is what I am requesting tonight of my elected officials:

First, I want you to stop treating these presentations, suggestions and recommendations from the staff as holding merit or serious of consideration.

Second, I want you to stop allowing the city staff to stall the end of this cell tower lease. I am not sure of staff’s motives, but they either are still trying to hide their incompetence or they more interested in Verizon’s interests than those of Pinole residents.

Third, please to stop spending precious time and energy protecting staff and extolling all that has been learned from the uncovered mistakes and blunders that have been discovered. Our city manager admitted at the 9/11 meeting that she made a mistake by signing the addendum to the lease without your approval and accepted full responsibility. This was big step forward. She made a HUGE mistake and admitted it. There is no need for you to continue cover that up or take partial blame. She expected she would get your approval, but then you voted against approval so she was left with a BIG mess to extricate the city from. Don’t spend your time helping her to find a “duct-tape” solution or explanation. They were not competent to execute the lease, so stop trying to protect them and say they are competent and were not responsible for the disaster that has occurred.

Fourth and VERY importantly, please stop backing down from Verizon’s threat. They are acting like a big schoolyard bully. Our park, our elementary school, our city does not belong to Verizon! Pay them for their expenses so far and perhaps some other other restitution for their time & trouble and then tell them to move on. I am not scared of Verizon and they are NOT going to build a cell tower across the street from my daughter’s school or restricted state park land and scared Native American sites. I don’t want you to be scared either. I don’t really care how committed they are to a site in a valley. We are just as committed to keeping our families, our neighbors, our children and our school staff safe. Stand up to them. Demonstrate leadership. How about for once, following Councilman Green’s lead and taking action to protect the residents of our great city?!

I truly think that City staff and Verizon believe they can wear us down and eventually we’ll give up. We may be tired of these games, but we are not going away or backing down. Verizon is NOT building a cell tower in our park or next to our elementary school. It is NOT going to happen…with or without your leadership and support.

You have a choice to make tonight. It is choice I have challenged you to make at other meetings over the summer.

Rescind the Verizon lease tonight. It is the only ethically and morally correct action to take at this point. The state and national parks have told you it is not allowed and illegal. Your constituents, including children, have begged you for months to listen to their concerns and ideas. These concerned citizens dedicated their personal time, the legwork, and a fair bit of funds to uncover a lot of missing information about the park, safety concerns, and the history of the proposed site and we discovered a way out of this lease for the city.

You have a responsibility to us…your office does not obligate our respect or admiration. You have to earn that….and you have one more chance to do so tonight.