Monday, September 14, 2015.
There was an amazing turn-out and outpouring of love, affection and emotion yesterday at Phil Green’s Celebration of Life.
Although weak Phil was strong enough to persevere throughout the day, speaking to what some say may have been as many as 300 people. We were in awe of the courage he has shown, courage to accept, with grace and dignity, his fate and hold such a memorable event.
His family, wife Phyllis, daughter Jenny, son Todd, mother Geri, brother Dare and sister Debbie also showed great courage.
I took just a few photos (below), but if you have photos of “Phil’s Celebration of Life”, please feel free to send them to me at ivettericco@gmail.com for posting on this blog. 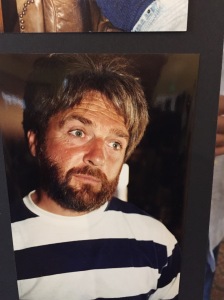 Paying Tribute.
Council member Phil Green spoke via telephone last night at the Pinole City Council meeting.
His message to the community was simple, he is battling cancer.
He is facing this fight just as he has faced so many others, with straight talk and with concern for his family and community.

We must not forget that our elected officials are human beings, with husbands, wives, children, grandchildren, mothers, fathers and loved ones. It’s something that is often lost in the rhetoric of politics and the heat of battle.

I have known Phil and his wife Phyllis for many years, they have been married for 46 years.
I know him because of his family, not because of his politics.

The call to serve your community is one that demands time away from your loved ones. Often, we as constituents, do not adequately acknowledge that sacrifice.
The greater calling in life, as far as I’m concerned, is to live life to the fullest and to be the most caring, loving and loyal person possible.
I think Phil leaves an important legacy for his family and for our city.

On Sunday, September 13, Phil is having a Celebration of Life.
This is an opportunity to pay tribute, to laugh, to share stories, to only shed tears of joy and embrace Phil with positive thoughts and memories.

The community is invited to visit with Phil on September 13, 2015, between 11 – and 4 at the Richmond Golf and Country Club.